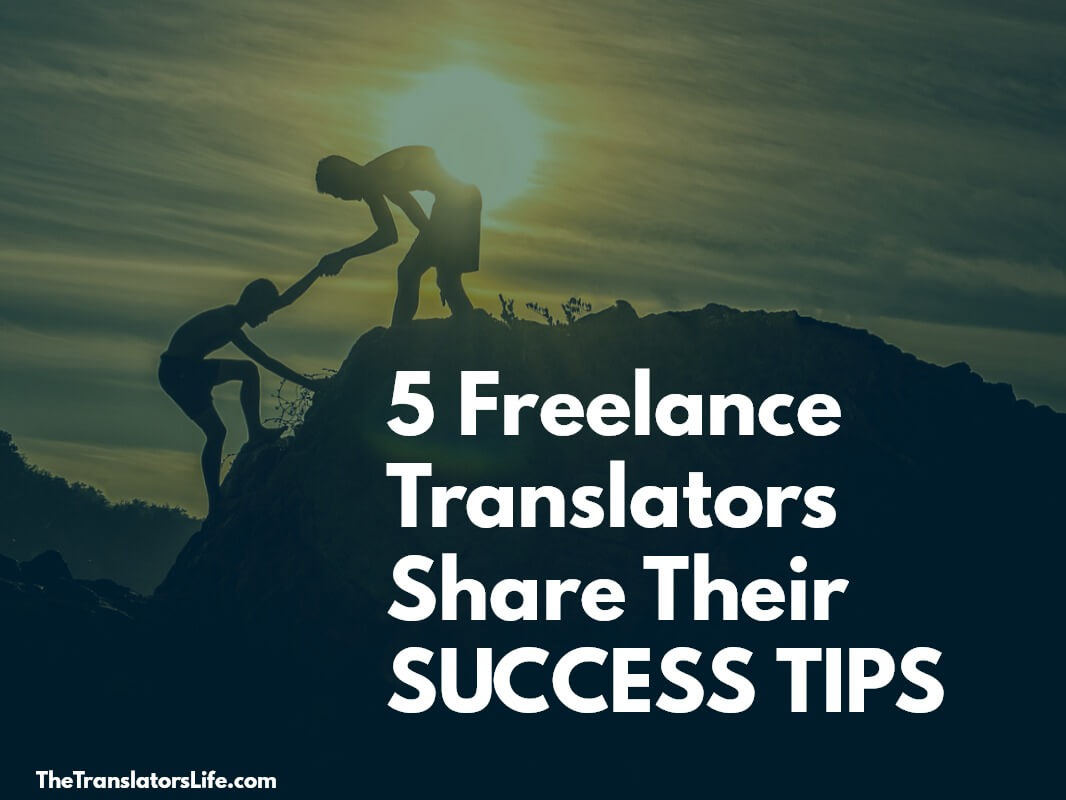 Do you think there’s only one magical way to become a successful translator?

Some people take up freelance translation as a second career.

Others become successful freelance translators through sheer force of will.

To help you find new ways to success, I’ve compiled the stories of five freelance–including myself–about how we got to where we are.

Kathy Canty started out as a broadcast journalist in Quebec, and she worked in that environment for over 30 years before embarking on a career as a translator.

Unlike many newbie translators, Kathy had built up a base of knowledge about politics, the economy and Quebec institutions.

Her journalism background meant that she knew how to work under tight deadlines: a huge plus in translation.

To build her network, she created a profile on LinkedIn and then let people in her network know she was available for translation work.

She hit upon a great opportunity as a good friend of hers was also a very busy and successful translator (see Cory McAdam below!).

She started helping Cory with her overflow and getting to know more translators in her network.

Now she gets many clients through word-of-mouth.

What can we learn from Kathy?

Gaining in-depth knowledge about the industries you want to work in positions you as a go-to freelancer.

She caught the translation bug big time when a friend from a consulting company asked her to translate some ISO documents.

She decided to enroll in the translation program at McGill University, and she continued to steadily build up clients as she made her way through the certificate program.

Now, her main clients are in the communications and PR sectors in varied fields, such as healthcare, fashion and finance.

She also developed specialties simply by virtue of working in them. She also quickly figured out the sectors she doesn’t like working in!

Cory has some great tips for new translators:

My advice would be to look for ways to add value. This will set you apart from others, and the client will recognize the effort. Some of these initiatives are simply part of the job, but not everyone does them.

Not everyone is content with simply sitting back and letting word-of-mouth build their business.

Una Dimitrijevic is a translator, proofreader and subtitler. When she started as a translator, she knew she had strong language skills and was confident in her knowledge of her focus area (EU policy).

For her translation and proofreading services, she works on academic theses, books/communication materials, EU policy reports and internal communications.

She leveraged her reputation as a reliable and driven person to let her network know that she was available for translation.

Before her word-of-mouth kicked in, however, she reached out to hundreds of translation agencies to get her business going.

Although her business initially relied on this work, now they just fill in the gaps in between projects with direct clients.

Since then, Una has found that work can come from unexpected places, like a big job from a networking event that she only attended for fun.

What can we learn from Una? That self-confidence is a game-changer.

Focus on one or two sectors and then get the word out to anybody who might be interested.

After getting a B.A. and M.A. in translation-related fields, Kerry Knapp got an in-house job right away with the Quebec rental board and then went to Cirque du Soleil, where he became the Head of Linguistic Services.

When he decided to switch from in-house to freelance, he had the same fears we all do: Could he maintain focus and interest at home instead of at an office? Would he have a steady workload and make enough to live on?

He found that after working as the head of a translation team for 10 years, he knew a lot of freelancers and could network effectively.

He started out with his previous employer as his main client and gradually identified his areas of specialization, which include culture, PR, marketing along with his passion areas of environment, architecture (and board games!) and concentrated on those.

Now, his clients come pretty much exclusively from referrals from his network and word-of-mouth.

What can we learn from Kerry’s experience?

Never underestimate the power of a network.

I of course have to include my own story in this post. (Read more about me here!)

I started out wanting to be a literary translator. My plan was to go to school, work as an in-house translator at a company and translate novels on the side.

While I do have a couple of small literary translations to my name, I have never worked as an in-house translator. I copy edit novels now instead of translating them. And I would never be anything but a freelancer.

(Just goes to show that life doesn’t always work out the way you plan!)

My first real translation job was with an agency of a friend of mine. It was very low paid work. The deadlines, the volume, and complexity of the work were enormous.

After one job didn’t work out so well, I hung up my hat and said, “This freelance translation stuff is for the birds.”

But translation never really leaves you, does it?

I kept going to translation school and became friends with someone who was starting a very small translation agency.

She was very encouraging, and she let me develop at my own pace. I also built up a network of contacts at medical institutions in Montreal, as I had worked for the faculty of medicine at McGill for a few years.

About five years after I had started translating, I had enough work to go freelance full time. And then word-of-mouth took over and my business just kept growing.

My words of wisdom:

Sometimes failure is just part of the process. And sometimes life has other plans for you!

Your way is okay

I hope that these five different stories give you both hope and a reality check.

The reality check is that people often underestimate how much time, experience, networking and experimentation you may need to grow your business.

The hope is that, even if you stumble and fumble your way through the freelance world, you can find your own way to make it.

Overall, these stories show that what sets successful freelance translators apart is an ability to get over their fears, develop a sense of maturity about the market and their business, and have a keen attitude to get out there and develop connections.

Are you ready to get out there too?